If you have lived in Georgia long enough, you should be able to recall the late Governor Zell Miller who gained the nickname, Zig Zag Zell during his years in political office. Zell was not fond of this pet name, but political watchers say Zell received it the old fashion way – he earned it. Zell was known for saying one thing and then doing another. The list that political watchers attribute to him bounces from one issue to the next, so take your pick. However, Zell is not the only politician to grace our presence with inconsistencies that leave us scratching our heads and questioning where they stand as they say one thing and do another.

Zell’s nickname came to mind after I saw pictures of the recent Atlanta Braves parade in Cobb County. As I watched the procession go by, there she was, Lisa Cupid, dressed in her Braves jersey, riding in the community parade, waving as she offered a Cheshire smile to the crowd. In a different photo, Cupid is later at the microphone addressing the crowds gathered for the festivities, with Braves players behind her. I could not believe my eyes. I soon got phone calls from South Cobber’s unhappy with the poor job Chair Cupid is doing. They shared their concerns and how appalled they were that Cupid would participate in anything related to the Braves when she tried to shut it down before it got started with her NO vote.

As I listened to the calls and took a look at photos they sent me, I shook my head in agreement…is this the same Lisa Cupid from November 2013? Lisa Cupid, then District 4 Commissioner, who voted NO on everything having anything to do with the Atlanta Braves?

What a difference a day or in this case, a few years make for Cupid, who is now Chair of Cobb – Cupid has changed her mind about the Braves value in Cobb and is now Team Braves as reflected by her jersey.

For those who attended meetings during the period when the Braves move to Cobb County was being discussed, you know that the former District 4 Commissioner was totally against it. Cupid made her position known at County Commission meetings about the Atlanta Braves where she often got into verbal fights with then Chairman Tim Lee and later with successor Mike Boyce. Cupid used lengthy periods of time during those meetings to incessantly complain that the process was rushed and that it lacked transparency, among other things. Cupid even tried to use South Cobb citizens to slow the process down when she expressed concerns about the County spending money to bring the Braves to Cobb and the Cumberland area and what trickle down or direct benefits are in the deal for citizens in District 4. 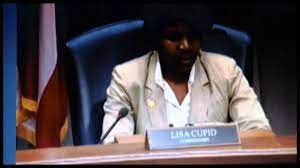 Newspaper headlines around the metro said the same thing: Four out of the five Cobb County Commissioners gave the green-light to spending $300 million on a new Braves stadium in the county’s backyard.

Cupid provided the only “NO” vote against the Braves coming to Cobb. The MDJ summarized Cupid’s position where she characterized the process as rushed, saying seven days is not an inadequate timetable for studying a complex financial deal and said in the meeting she felt “bullied” by supporters. “I believe this could’ve been a win-win for so many more people … if we only took more time.”

The curiosity of many and anger of others is justifiable and warranted. Some wonder if Cupid took the time to explain her non-support for the Braves in Cobb before she took that parade ride. Many found Cupid’s participation distasteful, while others pointed to Cupid doing what she has often done, being a political contortionist, and changing positions if it ultimately benefits her.

Members of the South Cobb community also wondered what happened to Cupid’s concerns for the ‘process’ to ensure that windfalls in Cobb for the Braves coming to town trickled down to South Cobb? They say long gone are Cupid’s concerns or advocacy for South Cobb receiving any benefits. In exchange for her parade ride, Cupid is now singing a different song as she embraces the team that Tim Lee brought to town.

What’s next is the outstanding bill for security. Now that it is time to pay the piper — the price for security provided at the home games of the World Series — where will the county look to pay that price tag? Should South Cobb taxpayers be responsible for any of it? Will South Cobb be forced yet again to cover the cost for things that provide no direct benefits to South Cobb residents? This is the question that citizens of South Cobb should be asking directly of Cupid.

At the time when she voted NO, Cupid’s rhetoric sounded plausible — her being concerned about the citizens of District 4. Now that the Braves are here, forgotten are the concerns she expressed for our community. South Cobb loses yet again thanks to Cupid. The questions in the air are will Cupid force South Cobb to pick up the check on a meal we did not eat?